The lifetime risk of stroke in Europe is 17%, and about every 50 seconds one European citizen suffers a cerebrovascular […]

The lifetime risk of stroke in Europe is 17%, and about every 50 seconds one European citizen suffers a cerebrovascular incident. Stroke survival is about 80%, however the average life expectancy after the event is about five years [Stroke Alliance For Europe – SAFE – Burden of Stroke (2015)[1]]. These staggering numbers transfer to a total estimated annual burden of 45B€ for our society. Given the high survival rates, the most direct challenge is to optimize rehabilitation after stroke. However, our healthcare systems are currently not up to this task because existing interventions are either not effective or too expensive. As a consequence, many patients do not receive the rehabilitation support they need, contributing to their reduced life expectancy. One approach to improve rehabilitation services is to rely on new technologies such as robotics and virtual reality. Despite the rise of VR-based interventions in stroke rehabilitation over the past decades, there is no consensus on their efficacy as compared to standard approaches. This lack of validated impact raises the fundamental question of how the promise of technology can translate into effective neurorehabilitation approaches. Maier and colleagues have addressed this critical question in the domain of Virtual Reality (VR)-based neurorehabilitation.

The ambiguous results of clinical studies may indicate that they suffer from methodological limitations such as small sample sizes and subject variability. However, an alternative interpretation is that technology as such cannot be decisive but rather the rehabilitation principles it implements. Indeed, VR is an umbrella term, and studies comparing its impact often include various systems or technologies ranging from off-the-shelf consumer computer games to systems custom build for stroke treatment. Another concern is that the deficits analyzed can cover a broad range from hand and arm function, to chronic pain and cognitive deficits introducing unnecessary variability into a comparison. Indeed, to assess effectiveness requires the comparison of similar systems that target the same impairment.

Maier et al. propose that VR systems specifically designed for stroke rehabilitation (or Specific VR systems – SVR) will be more effective than those intended for recreational gaming (or Non-Specific VR systems – NSVR). NSVR systems are recreational off-the-shelf video games such as provided by Nintendo Wii and Microsoft Xbox. Maier et al. define VR in psychological rather than technological terms as a computer-based technology that provides the user with a sense of presence in a virtual environment. Presence results from exposing the user to computer-generated sources of sensory stimulation that satisfy their perceptual predictions and expected sensorimotor interactions, or in other words controlling a virtual body acting in a virtual world as if it is the real world. This definition is used to avoid the all too common confusion between concepts and their implementation. In this case between VR and the computer screen or Head Mounted Display through which it is delivered. Their meta-analysis only considers interventions that train arm function in VR without assistive devices such as exoskeletons or external electrical stimulation. The control condition in the comparison is Conventional Therapy (CT) in particular occupational and physical therapy. Maier et al. have identified 30 studies of a total of 1751 published that satisfied the inclusion criteria. Their analysis subsequently of a total of 1473 patients revealed that SVR shows a significant impact on function and activity as compared to CT. In contrast, NSVR did not show such an effect. To test their hypothesis that SVR systems incorporate relevant principles of recovery, the authors also performed a literature review that identified eleven principles behind effective neurorehabilitation.  A content analysis revealed that SVR systems implement six of these principles in particular: task-specific practice, explicit feedback, increasing difficulty, implicit feedback, variable practice, and promotion of paretic arm use. In contrast, NSVR only incorporated three: dosage, variable practice, and promotion of paretic arm use (Figure 1). These findings decisively disambiguate the contradictory results found in the current literature on the impact of VR-rehabilitation. “Our study is a first attempt to shift awareness from implementation (VR) to principles.”

Overall, the findings of Maier et al. suggest that VR systems if purposefully realized for neurorehabilitation are valuable and valid tools to deliver effective functional rehabilitation post-stroke. Future studies should, therefore, not ask if VR, or any other technology, is useful or not. Instead, they should investigate which technology, including VR, is most appropriate to implement principles of neurorehabilitation. The authors believe that VR is well suited for neurorehabilitation because it allows the patient to interact in a safe and ecologically valid environment, where the exposure to sensorimotor contingencies can be controlled and modulated in a goal-oriented and autonomous fashion based on scientifically valid principles of rehabilitation. 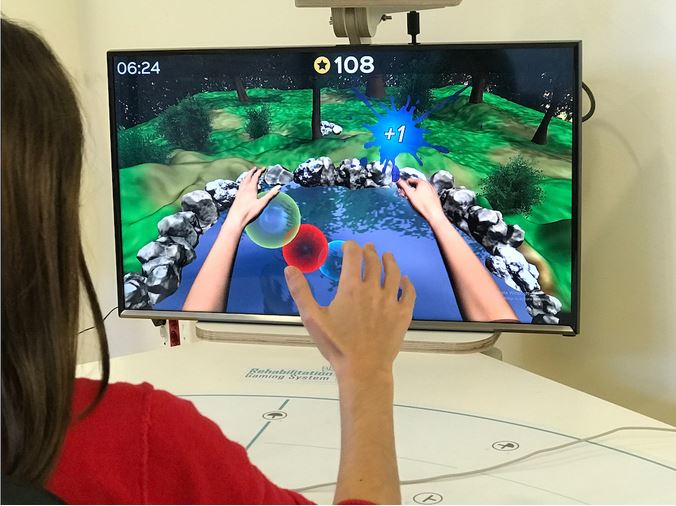 They expect that future technologies will contribute to an even more effective implementation of the principles underlying recovery and brain repair.

These findings are the result of a decade-long focused research program by SPECS-lab of the Institute of Bioengineering of Catalunya and the Catalan Institute of Advanced Studies, led by professor Paul Verschure, that develops advanced technologies for neurorehabilitation based on brain theory and clinical research to target the behavioral and neural consequences of brain deficits such as stroke. SPECS-lab has pioneered the Rehabilitation Gaming System (RGS, Figure 2) which has successfully treated 2000 patients and is generalized to a wide range of countries also supported by a recent project supported by the European Institute of Technology Health.

Virtual reality can be fun! Head-mounted devices in old adults

Exercise to stay healthy! Can people with multiple chronic conditions benefit from Exercising?

We use cookies on our website to give you the most relevant experience by remembering your preferences and repeat visits. By clicking “ACCEPT ALL”, you consent to the use of ALL the cookies. However, you may visit "Cookie Settings" to provide a controlled consent.
Cookie SettingsREJECT ALLACCEPT ALL
Manage consent

This website uses cookies to improve your experience while you navigate through the website. Out of these, the cookies that are categorized as necessary are stored on your browser as they are essential for the working of basic functionalities of the website. We also use third-party cookies that help us analyze and understand how you use this website. These cookies will be stored in your browser only with your consent. You also have the option to opt-out of these cookies. But opting out of some of these cookies may affect your browsing experience.
Necessary Always Enabled
Necessary cookies are absolutely essential for the website to function properly. These cookies ensure basic functionalities and security features of the website, anonymously.
Functional
Functional cookies help to perform certain functionalities like sharing the content of the website on social media platforms, collect feedbacks, and other third-party features.
Performance
Performance cookies are used to understand and analyze the key performance indexes of the website which helps in delivering a better user experience for the visitors.
Analytics
Analytical cookies are used to understand how visitors interact with the website. These cookies help provide information on metrics the number of visitors, bounce rate, traffic source, etc.
Advertisement
Advertisement cookies are used to provide visitors with relevant ads and marketing campaigns. These cookies track visitors across websites and collect information to provide customized ads.
Others
Other uncategorized cookies are those that are being analyzed and have not been classified into a category as yet.
SAVE & ACCEPT